The Islands Across the Sea

A long time ago, before the Age of Reason, the world was explained through stories and imagination. People became animals; animals became spirits; good deeds were rewarded; naughty children were imprisoned, eaten, or worse. And while we may believe ourselves long removed from such fantasies, old narratives still have the ability to resonate deeply within us. The Islands Across the Sea is an exhibition bringing together two artists who explore the enduring potency of myth and folklore, drawing on old tales and historical figures from the British Isles to show how they still hold powerful sway over our imagination.

With her new series of earthenware figures, Claire Partington presents us with a hedonistic royal court full of dazzling, vice-addled characters drawn from a variety of historical and mythical sources. Bluebeard appears as a bulldozing Henry VIII, laying down the law to his knife-wielding wife, with Love and Hate tattooed across his knuckles. The Lion and the Unicorn, the emblems of the Union of England and Scotland, become a pair of Tudor boxers itching for a fight, the unicorn beckoning the lion on with a provocative index finger. Velazquez’s scowling Mariana of Austria transforms into Goldilocks, dressed in a broad elaborate mantua and with an arrogant scowl across her face, in line with the ugly old woman the character was in the original British version of the tale. And Elizabeth I, the Virgin Queen, appears dressed in her coronation robes, with a pregnant bump protruding from beneath. All have subtle references to 21st century culture embedded into them, creating a body of work that combines history, humour, imagination and technical virtuosity.

Cornelia O’Donovan plays with old folklore and poetry, but in a loose and dreamlike way. She draws particularly on tales native to the British Isles, and especially Celtic poetry and myth – from the tale of Prince Llewellyn’s grief at the sacrifice of his greyhound Gellert being, to the figurative ballads of Ellen O’Leary and lines from WB Yeats. Her paintings are flat, stripped of all perspective or realism, their surfaces hazy and meandering like an old tale retold a thousand times. Roughly rendered yet delicately arranged, she creates patterned compositions reminiscent of old tapestries into which she plants naïve pre-Modern motifs. Outlines of old figures, ancient heralds, esoteric herbs and familiar animals all appear like inherited objects worn smooth by the touch of innumerable hands. They retain the homespun quality of medieval rustic artworks, flowing across the canvas like a stroll through a country garden.

Together these two artists describe the magic of storytelling through objects rather than words. Ideas and images appear that echo through our cultural history, changing shape and context, and yet somehow retaining the same power to fascinate, to frighten, to beguile and entertain. 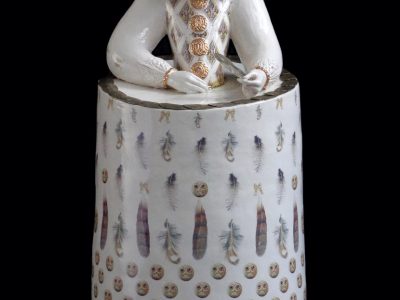 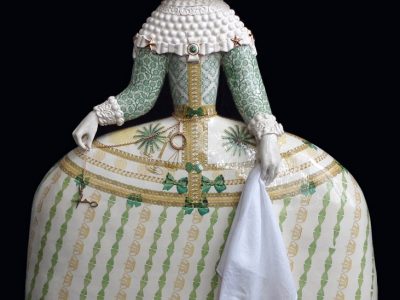 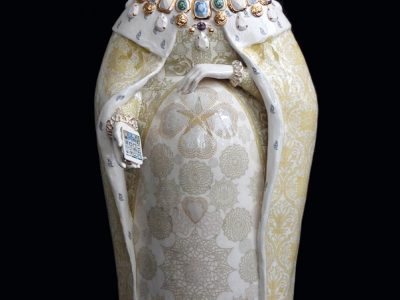 Claire Partington
Master of the Universe 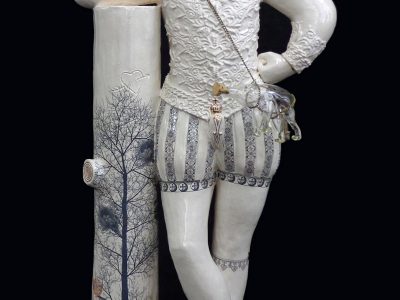 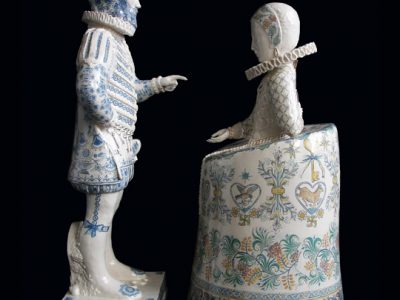 Claire Partington
Bluebeard and the Wife